Pt. 4: “Here the Word was made flesh” – The Holy House of Loreto

“While we too seek other signs, other wonders, we do not realize that He is the real sign, God made flesh; He is the greatest miracle of the universe: all the love of God hidden in a human heart, in a human FACE.”–Pope Benedict XVI

Our last morning in Manoppello the skies cleared and it promised to be a beautiful day and evening on which to hold the procession in honor of the Holy Veil.  After Mass I spoke again to Sr. Petra-Maria about the miraculous image.  The Holy Veil of Manoppello seems to be an icon written in light by the Holy Spirit, telling the whole of the Gospel in one human Face–the Word became flesh and dwelt among us, He suffered and died for us, He rose again!  We walked slowly around the reliquary, looking at the Face of Jesus from each angle, His eyes following us.  I wondered if the world has gotten so accustomed to man-made marvels of technology, flashing images and special effects, that it can no longer recognize a true miracle.  Sr. Petra-Maria and I agreed that there was only one thing more marvelous and miraculous in this world than the Holy Veil and that is the continuing miracle of the Body, Blood, Soul and Divinity of Jesus in the Eucharist!

Sr. Petra-Maria had also had given me a glimmer of hope of attending the procession that night

after all.  She said the Sanctuary of Loreto, where we were heading, was only an hour or so away.  We could possibly make it back for the procession after we checked into our hotel in Loreto.  I paid one more visit to the Holy Veil before regretfully parting. Later, we left Manoppello by taxi to pick up a rental car in Pescara and then drove north along the beautiful blue Adriatic Coast toward Loreto.  The drive was pleasant and filled with beautiful glimpses of the blue Adriatic.  About forty minutes into the drive, we suddenly slowed to a crawl–there had been an accident ahead that was being cleared.  The delay would take nearly 3 hours, making it too late to get back for the procession in Manoppello that night. For hundreds of years, the Veil of Manoppello was only taken out in procession once a year, on August 6th.  Later, there would be an additional procession on the third Sunday in May.  It had been very important to me, for reasons only God knows, to be part of that procession that evening, but now, it did not seem that it was God’s Will for us to be there.

The Basilica of Loreto soon appeared on the horizon and I turned my thoughts to the Blessed Mother and the Holy Spirit.  “The Holy House of Loreto, the first shrine of international renown dedicated to the Blessed Virgin, has been a true Marian center of Christianity for several centuries.”–Pope St. John Paul II  According to tradition, the Basilica contains the Holy House of Nazareth– it was the birthplace of Mary, the place of the Annunciation, where the mystery of the Incarnation of the Word in Mary’s womb took place through the power of the Holy Spirit, and it was the home of the Holy Family.

“And where could one speak more effectively of the Holy Spirit’s role than in the Shrine of Loreto, which recalls the moment and the place where He fulfilled the most supreme of His “life-giving” deeds, giving life to the humanity of the Saviour in Mary’s womb? For this reason the Holy House is first and foremost the shrine of the Holy Spirit. Christians who come here feel the need to invoke the Divine Paraclete to obtain His seven holy gifts in order to remain faithful to their baptism through which they were united to Christ and made to participate in His grace of Redemption.”–Pope St. John Paul II

If you have never heard of the Holy House of Loreto–to make a long history short–in 1291, when the Holy Home in Nazareth was in danger of being destroyed by the Muslims, it was transported by Angels across the Mediterranean Sea, then several more times before resting finally, on December 10th in 1294, in the middle of the road on the hill of Loreto. 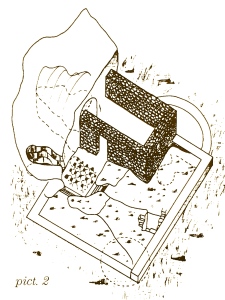 Research has discovered that the small home consists of three original brick walls, approximately three meters high, complete with graffiti and relics from the Crusaders in Holy Land and is standing without foundation on an ancient road. In it’s original form, the Holy House has only three walls because the eastern side, where the altar stands, opened onto a Grotto. (diagram) The structure and the brick of the home is not of the type found in the area of Loreto. A technical comparison between the Holy House of Loreto and the Grotto at Nazareth show the three walls and measurements match exactly the fourth wall, which is a grotto and the original foundation which can still be seen in Nazareth. (Diagram of the Home of Loreto and the Grotto at Nazareth in the Holy Land highlighting that the two parts were contiguous and coexisted.)

We entered the shrine, prayed in the Holy House and then again in the exquisitely beautiful French Chapel which contains the Blessed Sacrament.  After leaving the shrine to find something to eat (gelato for dinner works for me) we took a walk around the outside walls. I was still feeling a little sad about missing out on the procession in Manoppello when we came back along the side of the Basilica toward the piazza.  Lo’ and behold! I found myself in a procession!

As the priest holding the monstrance made his way around the piazza he paused and blessed us.  By seeking Mary in the Holy House of Loreto, she had led me to the Eucharistic Face of her Son and the Face of Jesus in my neighbors around me.  The Holy Spirit was at work! I was able to honor Him in a procession of the Holy Face after all.  Praised be Jesus!  (…to be continued in Pt. 5)