For latest news and information about Padre Domenico click here.

Oh God, you gave Padre Domenico the capacity of recognizing in the poor and the suffering the very Holy Face of your beloved Son, whose devotion he promoted with such zeal, through his intercession obtain for me the humility of heart, and simplicity of the little ones to whom you have revealed the secrets of the Kingdom, and in my hour of trial give me the strength to overcome the seductions of evil in order to put Satan to flight, and to merit, at the end of my earthly pilgrimage, to be able to contemplate the Holy Face of Jesus in the glory of paradise.
Though unworthy as I am of your Divine favors, I ask that you might grant, through the intercession of your faithful servant Padre Domenico, the grace I humbly ask of you…
Amen.

September 17th marks the anniversary of the death of the Holy Capuchin priest of Manoppello–the Servant of God, Padre Domenico da Cese.

As a nine year old boy in 1915, Padre Domenico predicted the devastating Avenzzano earthquake in Italy. A 6.7 earthquake hit that region the next morning, killing more than 30,000 people, including two of his sisters and burying him and his father in the rubble of their church.  A man he didn’t know pulled him from the rubble to safety, whose face he later recognized on his first visit as a friar to the Shrine of the Holy Face in Manoppello. When Padre Domenico knelt before the “Il Volto Santo” or Face of Jesus, the miraculous veil, he exclaimed, “This is the man who saved me from the rubble!”

A short time after Padre Domenico arrived in Manoppello the people were saying, “We have received a Saint!”

In her book, Servant of God, Padre Domenico Da Cese, O.F.M. Capuchin, An Illustrated Biography  Petra-Maria Steiner relates an example of Padre Domenico’s extraordinary gifts in the testimony of Giuseppe Orlando, whose fiancee, Anna Maria introduced him to the Padre. After spending nearly an hour in conversation, Padre Domenico suggested that Giuseppe have a mass said for his grandmother, Maria Grazia. “Giuseppe was astonished, ‘But who is she? I don’t have any grandmother by that name.’ Padre Domenico told him not to ask questions but to just say a mass for her.” So, Giuseppe had arranged for a mass for “Maria Grazia.”  Still bothered and wanting to get to the bottom of the truth, he went home and researched, and to his surprise he discovered that his father’s mother, who died when his father was only five years old, was named Maria Grazia. His father had been so young when she died that he had forgotten her name.

Like his friend and fellow Capuchin, St. Padre Pio, the humble Padre Domenico was also a mystic and stigmatist who had extraordinary gifts of the Holy Spirit; such as the gift of “reading souls” and bi-location. Penitents who traveled from Manoppello to go to confession with Padre Pio were admonished by him for traveling such a distance when they already had a holy priest in Manoppello.  He told them, ” Why did you come all the way here, so far? You’ve got a priest there, my spiritual son, he’s like me!” St. Padre Pio’s last documented case of bi-location, just before he died, was before the relic of the Holy Face of Jesus at the shrine of “Il Volto Santo” in Manoppello, where Padre Domenico was the rector.  Padre Pio had told his fellow Capuchins that the Holy Face of Manoppello was the greatest relic of the Church.

In September of 1968, as Padre Pio lay dying in San Giovanni Rotundo (which is about 200 km south of Manoppello in Italy), his friend Padre Domenico da Cese had just unlocked the doors of the shrine of the Holy Face one morning, and was astounded to find Padre Pio in prayer, in the choir behind the altar before the sacred image of the Face of Jesus.  St. Padre Pio spoke then to Padre Domenico saying, “I do not trust myself any more.  I am coming to an end.  Pray for me.  Good-bye until we meet in Paradise.”  Twenty-four hours later St. Padre Pio died in his cell in San Giovanni on September 23, 1968.  Testimony was later given by witnesses that Padre Domenico da Cese was seen at Padre Pio’s funeral (another case of bi-location). A film was even taken (here) which shows Padre Domenico walking slowly in Padre Pio’s funeral procession, even though Padre Domenico had never left the shrine in Manoppello.

Video of Padre Domenico in procession at St. Pio’s Funeral:

Padre Domenico shared with everyone his ardent love and devotion for the Holy Face of Manoppello, also known as “Il Volto Santo” — a miraculous veil which transmits supernatural beauty, and at the same time indescribable suffering. It is the Face of Mercy, Love and Peace. He would tell pilgrims, “This face is that of Jesus, and it is a great miracle, always love him.” Padre Domenico had done much research on the sheer byssus veil, the image of which is not made with any paint or pigment, and compared the iridescent quality of the colors to the wings of butterflies which also reflect iridescent color naturally.  He also made studies of the Face on the Shroud of Turin, and its similarities to the Holy Face of Manoppello.  He believed with all his heart that it was the face of the same man, and he was convinced that, like the Shroud of Turin, the Veil of Manoppello was one of the many burial cloths in Jesus’s tomb–the holy sudarium which covered the Face of Jesus in death–and also miraculously bears witness to His Resurrection.

On September 13 of 1978 while visiting Turin to venerate the Holy Face on the Shroud during a rare exposition, Padre Domenico, who was a giant of a man, was hit by the smallest car, a Fiat, as he was stepping out into a street. After suffering for several days in a hospital, and forgiving the man who had hit him, he died on September 17th, offering his life for the Holy Face on the Veil–the Face of the man who saved him as a child.

To learn more about his incredible life and passionate love for the Holy Face you can watch this wonderful video of his life: 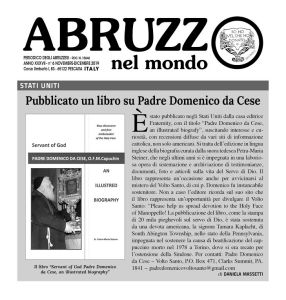 Video below on the Holy Face of Manoppello by Sr. Pertra-Maria Steiner explaining the wondrous properties of this mysterious veil: 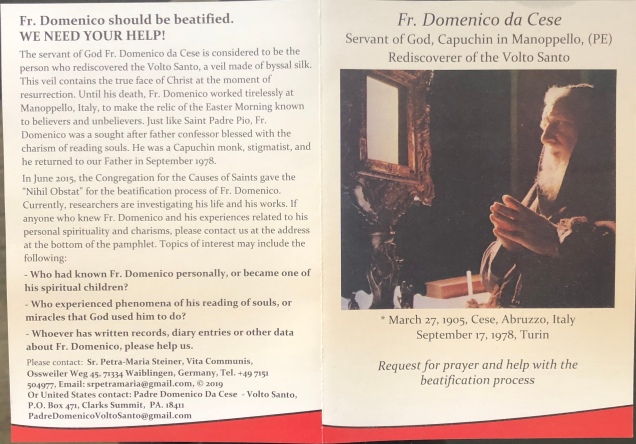 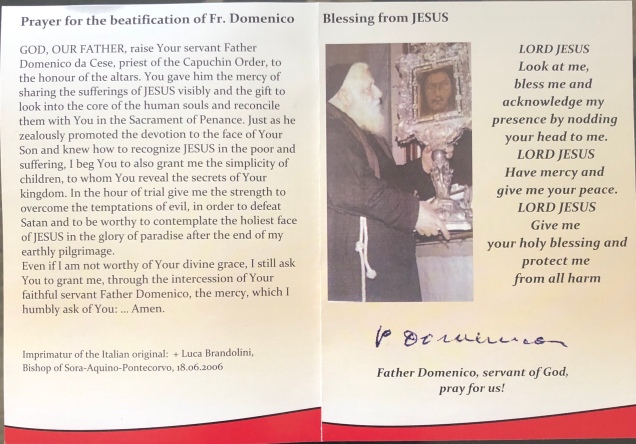